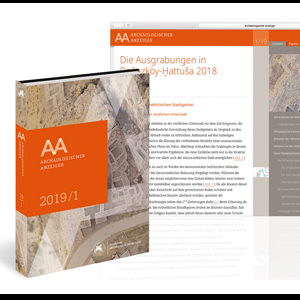 Together with the German Archaeological Institut we rethought a traditional scientific journal and developed it into a modern publication.

The Archäologische Anzeiger (AA) is one of the most important journals in the field of archaeology, published by the German Archaeological Institute since 1889. Nowadays, a lot of archaeological research is done digital and the worldwide networking of data plays an important role. Scientific publishing also means using different formats in order to reach a larger readership. Therefore, the AA should be rethought from scratch.

The content of the AA is published simultaneously in two media. While the printed volume serves as a scientific reference work, the digital version forms the basis for further modern research. In order to illustrate the unity of the two publications, a cross-media, aesthetic design plays a major role in the design approach. Both publications visually follow their functionality and have an individual character. The book should be strengthened in its value, appear generous and accessible – still a must-have on the shelfs of a growing target group. In contrast, the web application is intuitive, appealing and functional in order to assert itself in the research community with a high degree of usability.

For the first time in the DAI publishing history scientific publishing has been taken further by producing two formats out of one source: a printed book and a web-application. Each of these formats incorporate an extensive production process. Books are being written, edited, layouted and made ready for print. For web-applications content has to be written, layouts designed and programmed. In both formats there are limits for specific content. For example books cannot display films. And the visualization of exact colours on digital devices is limited. Therefore both formats compliment each other for an excellent communication in scientific research.

To combine both publishing processes the content was captured all together from the beginning. Authors needed to collect all content as text, pictures, videos, 3D renderings or links and mark (tag) these. The tagging automatically defined in which format the content was placed. At the same time the visualisation in InDesign and a so called “journal viewer” has been set up. A tuned conversion process made it possible to export the content for both formats. With the new “Archäologischen Anzeiger” a prototype has been developed where publishing and networking science makes sense.

This website uses cookies to improve your experience while you navigate through the website. Out of these, the cookies that are categorized as necessary are stored on your browser as they are essential for the working of basic functionalities of the website. We also use third-party cookies that help us analyze and understand how you use this website. These cookies will be stored in your browser only with your consent. You also have the option to opt-out of these cookies. But opting out of some of these cookies may affect your browsing experience.
Necessary Always Enabled
Necessary cookies are absolutely essential for the website to function properly. These cookies ensure basic functionalities and security features of the website, anonymously.
Analytics
Advertisment
SAVE & ACCEPT
Powered by